By 2025, gender equality should be achieved across all targets

In 2013, the Broadband Commission drew attention to the importance of gender equality among Internet users, by introducing this seventh advocacy target, so that the benefits of broadband Internet reach everyone.

According to the latest ITU estimates, 69 per cent of men were using the Internet in 2022 compared to 63 per cent of women. Gender parity increased from 0.90 in 2019 to 0.92 in 2022. Some regions and income groups have reached gender parity in Internet use including high-income countries, SIDS, the Americas, CIS countries and Europe. However, notable gender gaps in mobile Internet access persist in LMICs. The substantial gender gap in mobile Internet use in LMICs had been improving, driven primarily by South Asia where it decreased significantly from 67 per cent in 2017 to 36 per cent in 2020, according to GSMA. However, this progress has now stalled across LMICs and in some countries the mobile Internet gender gap has even increased.

As reported by GSMA, women were 16 per cent less likely than men to use mobile Internet across LMICs in 2021. By comparison, this gender gap was 15 per cent the year before, and prior to that it had reduced every year from 25 per cent in 2017. While more women continue to use the Internet than ever before, and it remains the primary way most people access the Internet in LMICs, their rate of adoption has slowed over the last year. Furthermore, in some countries, men’s rates of mobile Internet adoption has been higher than that of women’s, driving an increase in the mobile Internet gender gap.

Similar to the story we have seen in mobile Internet use, the gender gap in smartphone ownership had been reducing year-on-year across LMICs—from 20 per cent in 2017 to 16 per cent in 2020—but over the last year this has reversed. Women are currently 18 per cent less likely than men to own a smartphone. These gender gaps also exist in women’s access to and use of mobile money services, which are helping drive financial inclusion for women, can increase their economic independence, and strengthen their role as financial decision-makers. It is important to also ensure that women can access and use mobile money on par with men. Millicom Tigo started the Program Conectadas in 2017 in the framework of the Mujeres Conectadas initiative and is currently implementing the program in the nine Latin American countries where Tigo/Millicom has operations. Its purpose is to train young and adult women, professionals and non-professionals, on the benefits of technology and the Internet including financial services to help close the gender digital gap. To date, over 590 030 women have been trained throughout the region.

Significant gender gaps remain at other levels of the ICT value chain. Among the world’s leading tech companies, just 23 per cent of women were engaged in roles such as software development and engineering, and women represented only 26 per cent of board members in 2020.

Percentage of female and male population using the Internet, 2022 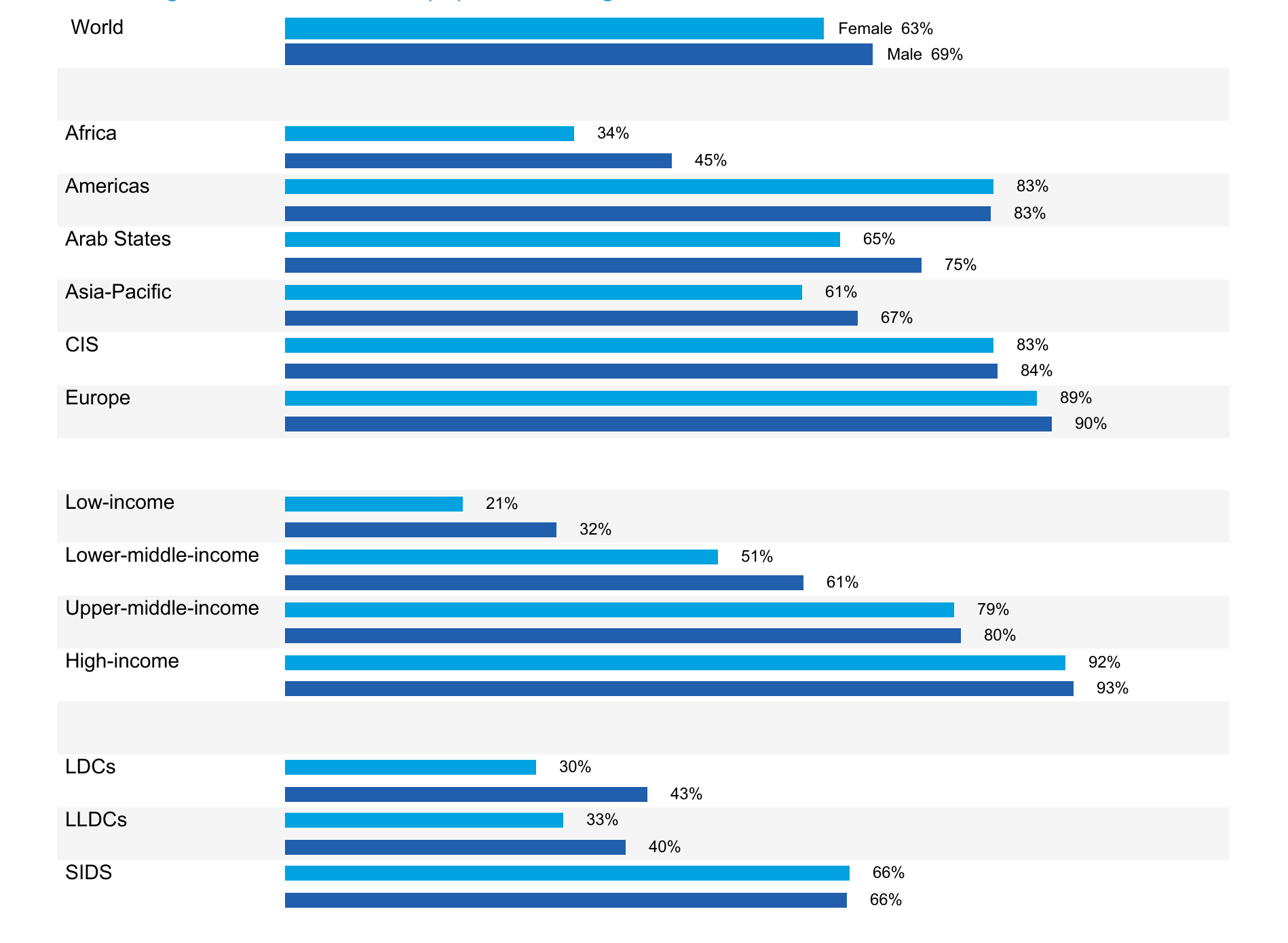