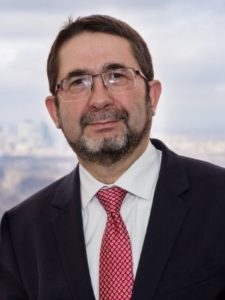 Mr. Piotr Dmochowski-Lipski is the Executive Secretary and the legal representative of the European Telecommunications Satellite Organization (EUTELSAT IGO) located in Paris, France. He was reelected for a second four-year term by the 49 Member States at their Assembly of Parties in March 2021. He also serves as a non-voting Director (Censeur) of Eutelsat S.A. and Eutelsat Communications S.A.

Mr. Dmochowski-Lipski is a former broadcasting journalist as well as a senior business and public service executive with 35 years of global professional experience in media, telecom, satellite and cable. He has also served at senior civil service positions in Poland. As Director General of Poland’s Ministry of Culture and National Heritage and Managing Director of Center for Educational Development, he led numerous publicly-funded projects in the field of digital development and education.

Mr. Dmochowski-Lipski holds a Master in Public Administration degree from the John F. Kennedy School of Government at Harvard University as well as an MBA from the Boston University Graduate School of Management.