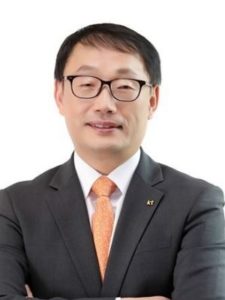 Dr. Hyeonmo Ku is currently CEO of KT. He was appointed as the CEO of KT in March 2020.

Dr. Ku is a veteran in the telecommunications industry with more than 33 years of experience. He has assumed outstanding leadership in the development of business strategy.

From 2009 to 2012, he was the head of Strategy and Sales Unit in Mobile Business Department, where he played a key role in making mobile business strategy, as well as planning and implementing of distribution channel strategy of KT.

He started his career in ICT industry at KT after graduating from the Seoul National University with a Bachelor’s Degree in Industrial Engineering in 1985. He received a Master of Science degree in Management Science and Ph.D. in Management Engineering from the Korea Advanced Institute of Science and Technology (KAIST) in 1987 and 1998, respectively.

Broadband is an essential platform for the humankind that has led transformation of human lives and industrial innovation to fulfill the dreams and boost the industries to create new opportunities for better lives for all. ​It will help accelerating progress towards an achievement of the UN’s SDGs and I am very happy to work with key stakeholders in this great UN initiative.