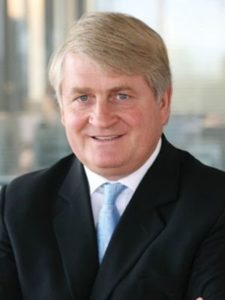 Denis O’Brien is Chairman of the privately-owned Digicel Group, one of the first Digital Operators in the world.

Denis founded Digicel in 2001 when the company launched a GSM cellular phone service in the Caribbean. The Digicel Group has extended its operations to 31 markets with revenues of over $2 billion. Digicel has over 13 million subscribers in the Caribbean, Pacific and Central and South American regions. They have invested more than $7 billion in these locations. In 2005, Digicel was one of the first operators to introduce WiMAX broadband service in the Cayman Islands and has been rolling out corporate and retail wireless broadband services throughout its markets.

Prior to Digicel, in 1991, Denis founded the Esat Telecom Group plc to compete against the former state-owned incumbent in Ireland, Eircom plc. Esat quickly established itself as the number two telecommunications company across the full spectrum of telecommunications services, including fixed-line, mobile, data and broadband. Esat was sold to British Telecom Group plc in January 2000 for €2.4 billion.

Denis is one of Ireland’s leading entrepreneurs with extensive investments across several sectors including international telecoms, radio, media, property, aircraft leasing, golf and other leisure interests. He also founded Communicorp Group, which owns and manages a portfolio of media and broadcasting-related companies in Ireland and seven other European countries. Communicorp was acquired by Bauer Media Group in 2021.

In 2000, he established The Iris O’Brien Foundation to identify and assist projects in Ireland and internationally which aim to alleviate disadvantaged communities. In 2004, he and other stakeholders established the Digicel Foundation, a nonprofit that helps residents in the Asia Pacific and Caribbean.

The Internet enables eCommerce and digital players on a global scale yet half the world is still without broadband. Africa needs an investment of $100B in new broadband networks. There is a collective responsibility of all players deriving revenue from broadband connectivity to contribute to the cost of building it. I call on all Commissioners to unite on this issue.