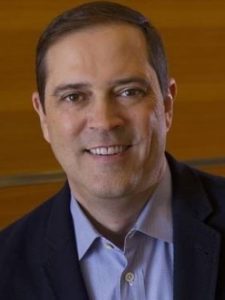 On May 1, 2015, Chuck Robbins was elected Chief Executive Officer by Cisco’s Board of Directors, effective July 26, 2015. He became a member of the Board effective May 1, 2015. In his previous role as Senior Vice President of Worldwide Field Operations for Cisco, Robbins led the company’s Worldwide Sales Organization and Worldwide Partner Organization.

As a member of the Operating Committee, he helped drive and execute many of the company’s investment areas and strategy shifts. He also sponsored the security and collaboration businesses at the executive level, and was a key sponsor for the Sourcefire and Meraki acquisitions. Robbins has more than 20 years of leadership experience. Prior to leading Worldwide Field Operations, he was Senior Vice President of The Americas, Cisco’s largest geographic region, where he led more than 8,500 employees in the United States, Canada, and Latin America. Prior to leading The Americas, Robbins was Senior Vice President of U.S. Enterprise, Commercial and Canada, and from 2007 to 2009, he led the U.S. Commercial sales organization, one of the largest growth segments in the company.

From 2003 to 2007, Robbins led the U.S. and Canada channel organization, where he was instrumental in helping build the industry’s most powerful partner program, now worth more than $40B in revenue to the company each year. He was recognized in CRN Magazine as one of the top Channel Chiefs in 2008, and VARBusiness named him one of the Top 100 Channel Executives in both 2005 and 2006. Robbins joined Cisco in 1997 as an account manager and quickly advanced to the roles of regional manager and operations director. Prior to joining Cisco, he held management positions at Bay Networks and Ascend Communications.

Outside of Cisco, Robbins serves on the board for the MS Society of Northern California, and the Georgia Tech Advisory Board for the President of Georgia Tech Robbins holds a bachelor’s degree in mathematics with a computer science concentration from the University of North Carolina.