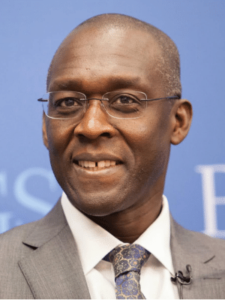 Prior to this appointment, Mr. Diop served for six years as the World Bank’s Vice President for the Africa Region, where he oversaw the delivery of a record-breaking $70 billion to Sub-Saharan Africa to help tackle development challenges such as increasing access to affordable and sustainable energy; boosting women’s and youth’s economic empowerment; and promoting an enabling environment for more innovation and technology adoption. A passionate advocate for Africa’s right to clean and affordable sources of electricity, he also called for greater investment in renewable energy and pushed for greater regional interconnectivity in the power and transport sectors.

In addition to his international organization experience, Mr. Diop, an economist by training who started his career in the banking sector before joining the IMF and later the World Bank, has extensive private sector experience. He has also held government positions, most notably the position of Minister of Economy and Finance of Senegal, where he played a key role in instituting structural reforms aimed at laying a strong foundation for Senegal’s growth in the late 1980s.

A recognized opinion leader in the economic and social development field, Makhtar Diop has been named one of the 100 most influential Africans in the world. In 2015, he received the prestigious Regents’ Lectureship Award from the University of California, Berkeley.

Mr. Diop holds degrees in economics from the Universities of Warwick and Nottingham in England.